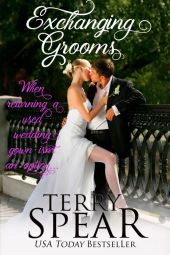 Lisa Robbins has one mission in mind–sell back her UNUSED wedding dress to the wedding shop, but when she has no success, maybe she’s going about this all wrong.Peter Crawford is intrigued by the woman who has somehow hooked Dallas’s most eligible confirmed bachelor, Pembrooke Hastings, Peter’s staunchest enemy. Not only had she gotten a commitment from him, but she left HIM standing at the altar. Dating the vivacious woman certainly appeals and Peter wants to know just how she hooked Pembrooke, but also why she didn’t marry him.Lisa Robbins is not dating and not marrying anyone, so she assures herself, her family, and her boss. But when Peter takes an interest in her, she’s wondering just what to do about Dallas’s most eligible confirmed bachelor number two, when he just won’t take no for an answer.
B&N: http://www.barnesandnoble.com/w/exchanging-grooms-terry-spear/1102680378?ean=2940012920652
Amazon : https://www.amazon.com/Exchanging-Grooms-ebook/dp/B00537SBX8
Smashwords: https://www.smashwords.com/books/view/62843
Kobo: https://www.kobo.com/us/en/ebook/exchanging-grooms
iBooks: https://itunes.apple.com/us/book/exchanging-grooms/id1037926851?mt=11
Google Play: https://play.google.com/store/books/details/Terry_Spear_Exchanging_Grooms?id=Er3PDQAAQBAJ 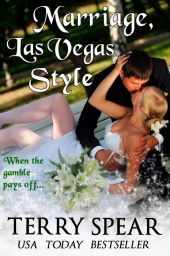 Marcy Taylor wants a divorce, but she doesn’t want her husband to go after the family fortune, so she’s trying to do this the easy way, no fuss, no muss. The only problem is Michael Lindquist doesn’t have a wife, and he’s sure she’s running a scam to try to get his family’s fortune!It all began in Las Vegas when Marcy threw caution to the wind. Boy, was that a mistake. Twenty-five thousand dollars richer with a husband to boot and one powerful hangover, she’s got to right the wrong.Now that Michael has a wife he doesn’t know he had, he’s not at all sure he wants to lose her. At least until he can unravel the mystery about her. And that’s how the roller coaster ride all began.
B&N
Amazon
Smashwords
Kobo: https://store.kobobooks.com/en-us/ebook/marriage-las-vegas-style
iBooks: https://itunes.apple.com/us/book/marriage-las-vegas-style/id1038409381?mt=11