His Wild Highland Lass
Lady Sorcha Barclay has fled her sister’s husband’s castle because of his unwanted advances, except men steal her horse, and she makes the mistake of not keeping to the cover of the nearby forest. An awe-inspiring circle of standing stones capture her attention and she captures the attention of the laird who owns the land.
Laird Ronan Daziel takes Sorcha to his castle to protect her and give her a home, but before long, he wants much more. He’s duty-bound to take a wife whose clan wishes an alliance with his. So why does he long to have something more? Everyone loves the lass just as much as he does. But he has pledged his loyalty to his clan and taking Sorcha to wife could lead to battle on several fronts. How can he not take her for his own when she stole his heart from the first moment he laid eyes on her near the ancient standing stones on his lands?
Note: This is still available in Kissing the Highlander anthology now offered as an individual novella
Amazon
Barnes & Noble
Kobo
iBooks
Smashwords
Google Play: https://play.google.com/store/books/details/Terry_Spear_His_Wild_Highland_Lass?id=Pp2HDAAAQBAJ

Lady Aila MacIntosh hopes she doesn’t regret the king’s marital choices for her and her sister. Until one braw Highlander bumps into her at the king’s gathering. He’s as taken with her as she is with him, until she learns he is but a commoner, when she is a lady. The king would never make a match between them. Alban of the Clan Daziel meets a beautiful woman at the king’s court, only she is a lady and out of his reach. When the lady and he meet under awkward circumstances, they chance to overhear a plot to assassinate the king. Their lives spiral out of control and losing his heart to Aila is only one of his pressing concerns. Protecting her from those who wish the king dead—his greatest. 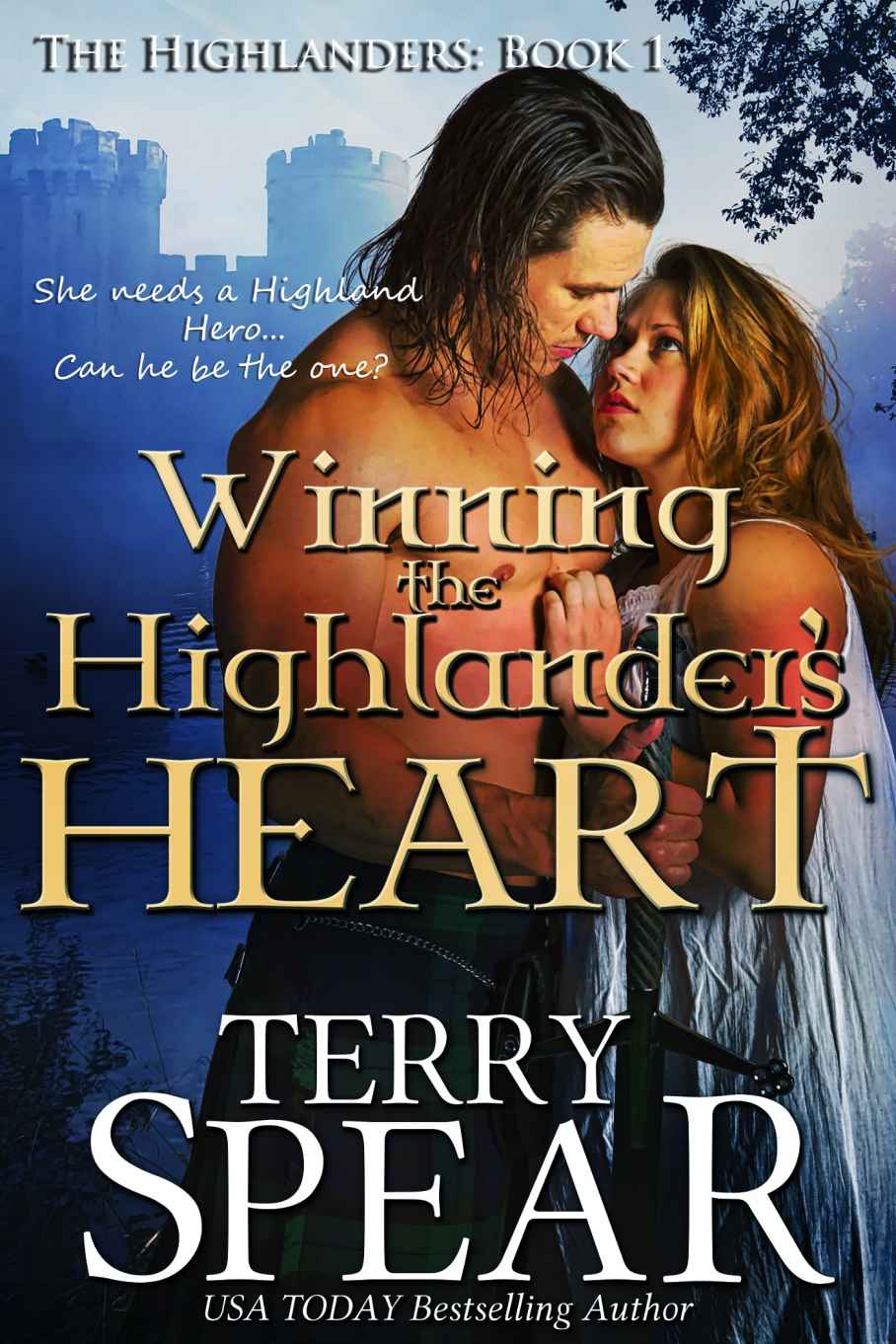 Lady Anice vows to flee the amorous advances of King Henry I, and return to her home in the Highlands, where she hopes to find a laird to wed, when she learns her staff has vanished. Premonitions of imminent danger warn her of foul play and she is certain she is cursed when it comes to marriage.

The king orders the Highlander Laird Malcolm MacNeill, seeking an English bride, to provide the lass safe escort and learn what has become of her staff. Escorting her home safely proves a dangerous trial in and of itself and keeping his heart out of the matter, when the king wishes her wed to one of his loyal barons instead, complicates issues further. Losing his heart to the lass means Malcolm could very well lose his head.

The Accidental Highland Hero–Book 2
Lady Eilis Dunbarton’s life undergoes a drastic change with the death of her cousin, Agnes. Now she’s faced with the disagreeable prospect of marrying the man who was to be her cousin’s husband. Not by a change of contract, though. Instead, by deceit—pretending to be her cousin. But if her husband-to-be discovers she’s not really Agnes, her life is forfeit. So what choice does Eilis have but to flee?

When Laird James MacNeill’s clan rescues a half-drowned lass from the sea, there is speculation she is of the enemy clan, especially since she doesn’t remember her own name. James is immediately enticed with the lady, but his focus must remain on finding the proper bride. For if he does not wed soon, he must give up his holdings to one of his younger brothers.

Focus slips away with each day Eilis is close, and James finds himself contemplating the thought of taking her to wife without knowing her true identity.

But how dangerous would the end result be?

And what will happen if Eilis’s husband-to-be comes looking for her only to find her in the arms of another man?

Highland Rake, Book 3
Dougald MacNeill takes Lady Alana Cameron to his laird brother James’s Craigly Castle when he finds her roaming the heather on the MacNeill lands. But who has sent her there and why? Her uncle, laird of the Cameron clan, and warring with the MacNeill for years, has made a marriage arrangement with another clan and now that is even at stake.
Having witnessed her father’s death, and even believing he had returned her home when all along he had been dead, Alana discovers she has the gift, or curse, of seeing the newly departed and sometimes those who should have long ago passed over. Her own deceased brother continues to plague her, the rake, and now another, who is very much of the flesh, Dougald MacNeill, has her thinking marrying a rake might just have its benefits. Dougald’s sister, who is one fiesty ghost, has offered to help Alana keep Dougald in line if he thinks of even straying.
But who sent Alana on a fool’s errand in the first place to remove her from the Cameron’s lands and set her squarely in Dougald’s care, and who really killed her father and her brother, and what has it all to do with Alana? Will she and Dougald learn the truth before it is too late?

Edana Chattan senses concerns where people she knows could be in danger. When her brothers warn her they’re in trouble, she can’t convince her father to listen to her, so with an escort, she tries to locate them. Separated from her escort during a storm, she is discovered by Angus MacNeill, who is tasked to return her right home.Only Edana has other notions–and convinces him and his companions to allow her to use her abilities to locate her brothers who are manacled in a dungeon somewhere. That leads to a faux marriage and more dungeons and more trouble than Angus had ever thought possible. So why is the bewitching, fiery-haired lass making him think of marrying her for real?
B & N
Smashwords
Kobo

Anna, the shepherdess, finds a half-naked man in her bed, so what’s a woman living alone in a cottage in the Lowlands of Scotland supposed to do? Prod him with her pitchfork to chase him off! Only the man is not just a traveler seeking her bed for a rest—but a wounded Highlander, who fights back, swinging his sword!
Niall MacNeill is searching for a Frenchwoman of nobility to escort to his brother’s castle for safekeeping, when he and his friend, Gunnolf, are attacked by another Highland clan, seeking the same woman. The other Highlanders wish to sell her to the highest bidder—English or French—it does not matter.
Niall takes refuge in a sheepherder’s cottage to heal up from his wounds and discovers the shepherdess taking care of him may very well be the woman he seeks. He has no intention of doing anything but what his brother requests of him—ensure her safety on their way to Craigly Castle—but when the lass so bravely wields her pitchfork at him, he is thinking of other, more interesting possibilities.

Lady Isobel is a Norman laird’s daughter, living near the Scots border where her father, Lord Pembroke, is trying to keep the peace. But her mother was a Highlander and the man Isobel loves most of all is Laird Marcus McEwan, who has been bringing news of her mother’s people for years. But now Isobel’s father wishes her wed to an English nobleman, who will carry on his title. Isobel will wed no other man but her heart’s desire—and that is one braw Highlander from her mother’s homeland.
Laird Marcus McEwan has loved the feisty lass forever. For years, Marcus has tried to convince Lord Pembroke to allow him to wed his daughter. But the Norman lord will not allow it. Then ambushes and murders make it too dangerous for Marcus to reach a peaceful resolution.

Nothing goes as planned and keeping the lass for his own is fraught with danger, as they try to determine who was behind the killings. Isobel and Marcus will do everything in their power to ensure they are together as they have always vowed they would be.

Gunnolf was left for dead when he was young as he went on one of his kin’s raids, but finds his way to the Highlands and a home with the MacNeill Clan. The clan’s seer warns him he must rescue a woman in need, only he rescues the wrong woman. Yet, Brina is in need. Her father, wounded in battle by Gunnolf’s own kind, must oust the tyrant who has taken his place if he is to rule. Yet he needs Gunnolf’s help, but Gunnolf learns Brina’s father had killed Gunnolf’s brother. Brina is torn between hating the Viking who has rescued her, and knowing that his kin had killed her grandfather in an age old tale of fighting between their people, and loving the man who took her under his protection, and the wolf cub she insisted on rescuing. Now, Gunnolf must make a choice: wed the lass as her father has insisted and restore her father’s position as chief of his clan when he’s not sure her father is trustworthy, hoping he can obtain a peace between his people and hers, or leave well enough alone and stay with the MacNeill Clan, his family for the past ten years. The problem is one sweet Highland lass that makes him want a woman—this woman—to warm his bed and have his bairns and to protect and cherish, when having a wife was the furthest notion from his mind…until one prediction changed his whole life

Many want him dead, but he is her prisoner for now.

Quinn’s mission is to steal a woman from a clan and escort her to his brother, Cormac, the chief of their clan, so he can marry her. But Quinn’s brother has tried to have him murdered before, and Quinn suspects Cormac is hoping the woman’s clan kills him this time, if the mercenaries they sent with him don’t do the deed first.

Avelina’s cousin warns her that the storm sank a ship and a warrior lays on the shore, badly injured, but armed. Armed with a sword of her own and with her wolf companion, Avelina finds Quinn and rescues him from the incoming tide, but now she must hide him from her kin before they learn he planned to steal her cousin away. If he survives his injuries and her kin, he must deal with his traitorous brother before it is too late.