Shannon Rafferty learns that hanging out with the bad boys could be a dangerous business, but hooking up with a cop is even worse. Now she’s on the run, trying to avoid being murdered by his cougar shifter brothers and uncle. If that isn’t bad enough, a deputy sheriff hunts her down while she’s running as a cougar and trying to survive in the Colorado wilderness. He vows to protect her no matter what she’s done. With three dead boyfriends to her name, she’s sure she will be the death of Chase Buchanan before either of them can prevent it. No matter how much she knows she has to run again, he soon holds her heart hostage. But will that be enough to keep them both alive?

Chase Buchanan—as wilderness cabin resort owner, former US Army Special Forces, and part time deputy of the small town of Yuma, Colorado that boasts a love of cougars—is tasked to track down a cougar reported to be hunting human prey. Chase soon learns she’s a shifter, not a full-time cougar, and she’s on the run. When he takes her in, he vows to protect her. After losing his wife and baby to the human kind of predator years earlier, he’s not letting Shannon’s hunters kill her, too. But how is he going to hold onto the wild-cat woman, who is unpredictable at every turn, without losing his heart to her, and then losing her as well?

Call of the Cougar: Looking for love can be dangerous…

Special Agent for the U.S. Department of Fish and Wildlife Services, Tracey Whittington, takes down wildlife traffickers and more, but what she doesn’t expect is to be in a shootout, multiple times, when the business turns deadly. Nor does she suspect she’ll be working with Hal Haverton, who serves as a part-time deputy for Yuma Town, Colorado, and runs his own horse ranch. As long as he doesn’t stop her investigative work—she has been placed on administrative leave due to the last shootout—she’ll be just fine.

Hal Haverton has every intention of keeping the wild cat safe, even if it means helping her to solve the case when every time he turns around, she’s involved in another shootout. When her boss asks their good friend, the sheriff, to have one of his deputies serve as a bodyguard for the cougar shifter, Hal’s all for it. So is the other deputy, but Hal’s got this covered. Even if getting somewhere with the lady means having his gun ready at all times. There are definite perks to getting to know the Special Agent better—if they live long enough to do something about it.

Cougar shifter, Dr. Kate Parker, is planning her annual camping vacation alone this year. She runs into trouble before she even starts her trip in the form of one wounded, hot cougar undercover cop—or so he says. He’s not going along with just her tender loving care because he came into town as a cougar, and he needs her help to get him back to where he can take up the search to look for an arms dealer, who just happens to be a cougar too.
Leyton Hill slipped into the unlocked, darkened clinic, figuring his luck had just changed. Except he doesn’t plan for the good doctor to be napping in her office. Taking him on her vacation wasn’t in the plan, and taking her hostage, hadn’t been either, but now she’s stuck with him until he can get back to his mission and the chase at hand. It appears the roles have reversed and who’s holding whom hostage now?

Trouble doesn’t always come in twos.
Jack Barrington still has an army obligation that takes him away from the woman who had enchanted him when they were both in college, but Dottie Hamilton refuses to marry a man in the military because of the problem of raising cougar shifter cubs in foreign lands and the worry he may be killed while overseas like her cousin was, leaving a wife and three little ones behind. When Jack returns home to see his family and Dottie’s only living relative, her aunt, she convinces Dottie to bring her twins home to see her—and to see him. Jack has two-and-a-half weeks to convince Dottie to wait for him while he finishes his last three months on active duty. And learns the truth. Dottie’s twins are his own flesh and blood.

Dottie has made a lot of mistakes in her life, including providing a father for her children by marrying a man, who turns out to be an arms’ dealer. When Jack returns to her after finishing his army obligation, he’s determined to prove he’s the mate she needs in her life, and he has every intention of being the father to his four-year-old twins. Now the criminal deeds of Dottie’s dead ex-husband have come back to haunt her. And she and Jack and their cougar friends will have to band together to stop the arms’ dealers before they destroy what the cougars hold dear. 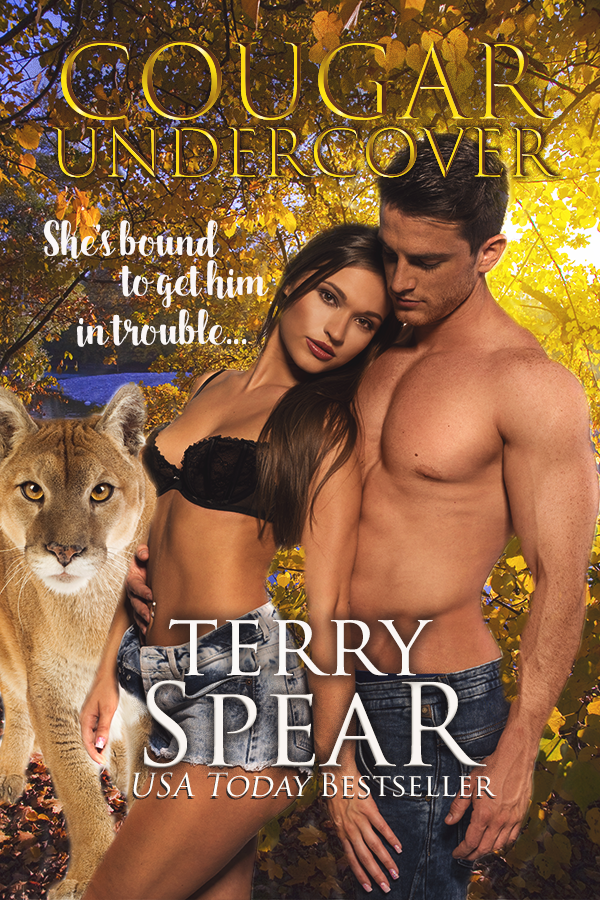 FBI Special Agent Addison Davidson needs a husband. Not just any guy, but someone highly skilled in weapons’ training, who has served in combat, Special Forces, hard-charging, and who can handle crises situations under pressure, unattached, and preferably is a cougar shifter like her. Captain Dan Steinacker is one hot cougar, and he takes the bait. Now someone’s trying to kill her. A mole on her team?

Now a sheriff of Yuma Town, Dan can’t quit thinking about the sexy she-cat he’s fallen hard for. He has to convince Addie he’s the cougar for her, and that means taking on the villains, whoever they are. Guns and teeth and claws readied, the cougars aim to win. Learning who and why she’s on someone’s terminal list is their only mission now—before it’s too late. 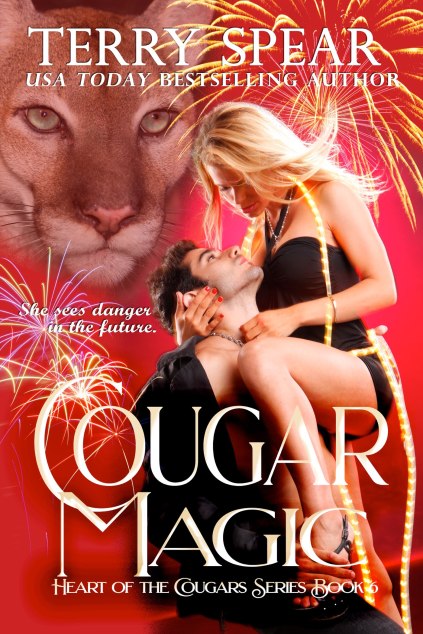 She doesn’t think she needs a hero, but he’s taking the job.

Deputy Sheriff and cougar Stryker Hill is not on duty when the sheriff asks him to check out a possible break-in of a resident’s home while they are away on a cruise. What he doesn’t expect is to find the beautiful and mysterious cougar he’d seen at a Christmas charity where he was showing his abs off as Santa Clause. But she’s got some moves to rival his own as she takes him down and he’s left wondering who she really is and how he’s going to keep her from leaving Yuma Town before he learns the truth.

Cougar shifter Nina Lamar has to protect her sister from the pharmacist who laid the blame on her for his thievery, and Nina has to help clear her sister’s name. But now Nina’s got the sexy Santa on her case, and she needs to deal with him first. She has to admit he’s just as hot as when she’d first seen him, but the guys who are after her sister, are after her too now. She to needs save them both before it’s too late. Too bad Stryker thinks she’s one of the bad guys, unless she can prove otherwise. That’s hard to do when her visions are the only proof of why she’s there in the first place. But time is running out, and she has to save her sister—nothing else matters…except the sexy deputy sure can be a hot distraction on the cold, snowy nights.

Ricky Jones is looking forward to his first day on the job as a deputy sheriff in the cougar-run town of Yuma Town, but he doesn’t expect to run into his former girlfriend while he’s wearing his cougar coat. Now he wants her back in the worst way, but he’s sure she’s going to be even madder at him for dumping her three years back.

Mandy Richards is on her way to an interview at a hospital north of Yuma Town for the position of a Licensed Practical Nurse when she hits a cougar in the thick foggy night, a full moon silhouetted in the gloom on Friday, the thirteenth. Checking on the wounded cougar changes her world forever.

But her most recent ex-boyfriend isn’t going along with Ricky’s plans to renew his relationship and things are bound to turn deadly.

Falling for the Cougar

Army Captain Nicole Welsh’s premonitions of danger warn her more trouble is headed her way after her parents died in an unexplained car accident. Is it just her imagination that someone bad is out to get her? Her vacation to Galveston Island is meant to be a break from her awful job, breaking up with an unfaithful boyfriend, and getting over her parents’ deaths. But her best friend skips out on her, now a tropical storm wreaks havoc, she’s certain someone is stalking her, and she runs into a fellow cougar who might just be her salvation. Unless, he’s one of the bad guys.

Scott Weekum is a finance officer at Fort Hood, Texas, having every intention of having a good time at Galveston Island, and rescuing a mermaid from the Gulf, who he envisions is in trouble. Supposedly, the tropical storm is moving out of the area, so he should be fine. What he doesn’t expect to find is that the mermaid is also an officer from Fort Hood, she has premonitions like he has, she’s a cougar, and she believes she’s in danger. Since he’d just broken up with a she-cat who had transferred to another post and he’s all alone, and she’s all alone, he’s determined to spend the time with Nicole. Except she seems to think someone’s stalking her, and her paranoia is beginning to rub off on him. Is she in danger? He’s not sure what to think, but has every intention of protecting her, whether she needs his protection or not.

Cougar shifter Vanessa Vanderbilt is Yuma Town’s veterinarian, and though she’s attracted to sexy William Rugel, family physician, he’s on her least favorite list of doctors in town. After all, why wouldn’t he be when he thinks veterinarians aren’t smart enough to make it in medical school? Top that off with the issue of her being stood up twice at the altar, and by different grooms, no less!—so taking up with another cougar isn’t in the plans.

William Rugel has no idea why Vanessa, who he is extremely attracted to, won’t give him the time of day. But everyone in Yuma Town is determined to get the two of them together and he’ll do whatever it takes to prove to her he’s one of the good guys. Even take in a puppy because he knows she adores animals. So does he, but he hadn’t planned to get a dog to get a date!

It’s time for another cougar Halloween party—and since Vanessa had met her last two fiancés at Halloween parties, who knows what will come of this one!

Cougar shifter Jessie Whittington plans to work on her psychic romance book before Christmas at the Whispering Pines Resort on the North Shore of Lake Superior, but peace and quiet aren’t exactly what she’s going to get right before Christmas.

Former army ranger Emerson Merriweather has returned home after being ambushed on a Black Ops mission, and now learns his uncle has died. When he meets his only guest at the cabin resort, he’s surprised she’s a cougar too. Before long, a blizzard hits, bear shifters wreak havoc, and he’s helping Jessie decorate for Christmas. Something he never thought he would be doing.

Jessie’s definitely the light in his life but he still has to take care of the man who set him and his team up during the mission. He knows he will be looking for Emerson to finish the job. Mystery and intrigue are the name of the game and things aren’t always as they seem.